The purpose of this page is to provide a contact, a port of call; a haven of images of recent activities and a point of reference for those trying to find a place to put their boots on in the sunny Dongguan afternoons or hot evenings – cold winter evenings are also available, but terribly infrequent. 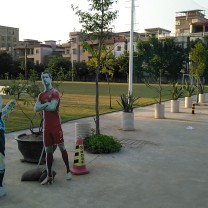 BBQ Factory, Dongcheng. The only really comfortable grass field in Dongguan. Showers and bar facilities. The field does get flooded from time to time. It sits at about river level too.

BinJiang Sports Park. Dongjiang Avenue, 万江区 Dongguan, Guangdong, China. Tel:  +86 769 2271 1816. Adjacent to the Dongjiang River to the north, Dongjiang Boulevard to the southeast, and Quhai Bridge (National Highway 107) to the west, Dongguan Binjiang Sports Park assumes a triangular shape allowing great transport convenience. It also has a whacking great big Olympic torch monument strapped in the middle of a lake.  You cannee miss it. Location: Click for a map on Google. GPS:

Chashan Decathlon field. Book via Decathlon – and for free. Location: Click for a map on Google: TBA. GPS: TBC

Hengli GuSiTu Sports Field. 360 Tian Chao Road, Hengli. Tel:  Jackie (Tel: 13802388480, WeChat: Bffal01994). Although the majority of amateur soccer in Dongguan is concentrated in Dongcheng and Nancheng, there are still many teams that play outside of the city. The newest, and arguably the best, facility outside of Dongcheng and Nancheng is the Gusitu Football Field in Hengli Town. For many years, it was one of the few remaining grass pitches in the city, but last year local suitcase company, Gusitu, paid for a complete renovation. Now they have two 8-a-side pitches that can be turned into one 11-a-side pitch. The surface is as good, if not better, than that at Soccerworld. The Gusitu Arena is also home to Hengli Buffalo, one of the oldest teams in Dongguan. The newly built clubhouse contains trophies, photos and jerseys from their twenty year history. Cost: 400RMB (8 a side), 800RMB (11 a side). Location: Google maps. GPS: 23°01’35.7″N 113°57’56.7″E / 23.026576, 113.965746

People’s Park Stadium. Address: People’s Park, Dongcheng. Contact: Booking Office (Tel:22222848). Cost: 500RMB (7 a side), 1000RMB (11 a side). Picture the scene; Two worn out pitches with rusty goalposts and torn nets. Surrounding the pitch is a running track covered in leaves and rubbish. Far away from the pitch are empty terraces, separated from running track by high walls with peeling paint. 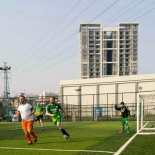 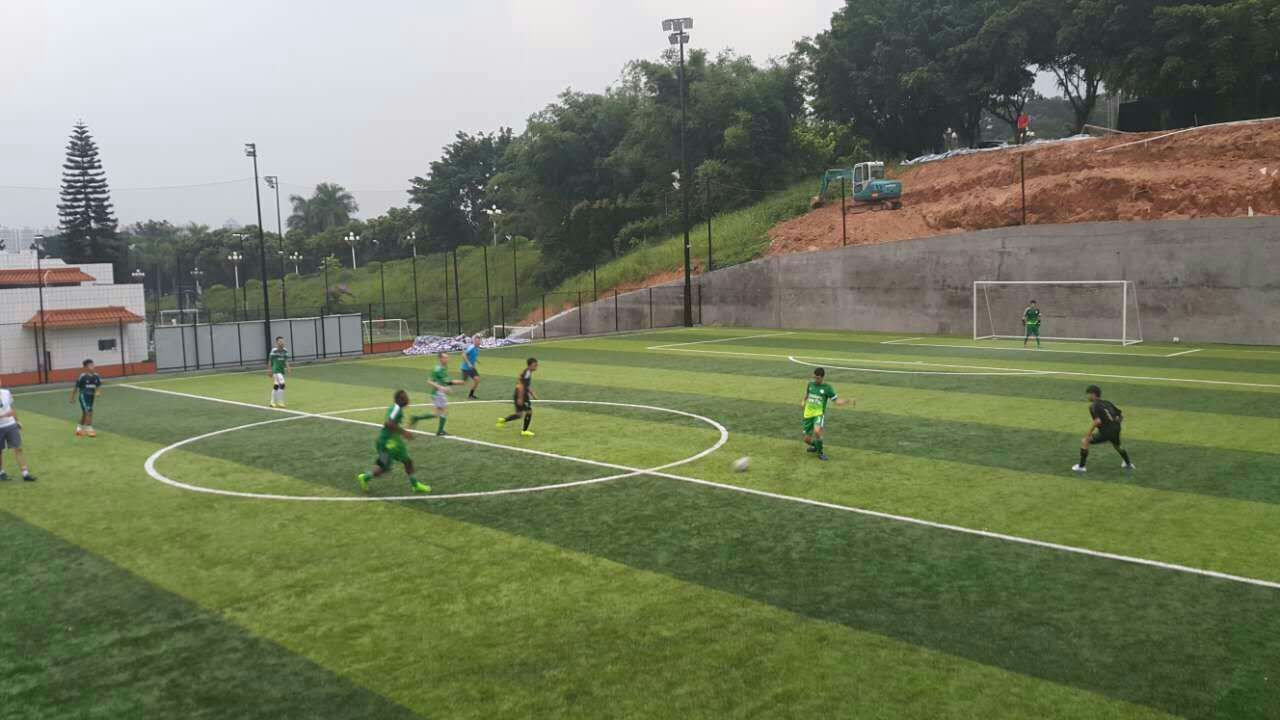 Join Murray’s F.C. by the below means. Murray’s have players from all over the world, located all over Dongguan – and beyond. Players often travel from Houjie, Dongcheng, Nancheng, Hong Kong, Wanjiang, Guancheng, Hengli, Songshan, Shatian, Liaobu, Zhongtang… to name but a few districts and townships. Linguistically they have Portuguese, English, Spanish, Welsh, Farsi, Chinese, Cantonese, Norwegian, Dutch and other language speakers amongst our gibberish. Every continent is represented except for Antarctica – but they’re working on signing some penguins.

Join other teams such as Dongguan Raiders, or ask acton28 on wechat to join a Dongguan Football 东莞足球 wechat group.

Why not? Some days you will see many teams with or without foreigners on fields across the city. Murray’s F.C. may field two teams simultaneously at the same time. There are usually two games a week – and there is no obligation to play often or infrequently. Demand and supply suits all. Their players vary in age from as young as 16 to as old as time itself. No names mentioned Rogerio, Alain and Ruben. Ability isn’t needed, although it does help. Whether you’re a budding Shaun Goater, Messi or Falcao or more suited to the styles of Lee Bradbury, Andy Morrison, or Royston Keane, Murray’s will find you a spot. Come play the game. They hold the odd training session too.

Boots and something suitable to sweat in. Shinpads and insurance is advisable because you never know. Kits aren’t free but some clubs will order. The costs can be free or, equate from 88-120RMB per kit (shorts, customised name and number t-shirt with socks). Other equipment is made in the region. Try Dongguan QunJian Sportswear, Podiyeen, HiAtheletes, DK Sports,  Intelligent Training systems, DG Shuoke, DG Oxi Sports, okay, you get the picture, talk to Dr Google.

After each game and at frequent intervals socials may extend from a free drink, to cheap Argentinian, Brazilian BBQs, to just a natter in a bar such as Liberty or Murray’s bar over some American or Irish style foods. Then there are day trips to Hengli to play a game, away games in Houjie, Hong Kong, Guangzhou and so on. If you want it, you will find it – or make it happen.

Teams in and around Dongguan have included:

Maybe due to UEFA and FIFA financial fair play, we’re unable to compete with the big boys without backing. If you want your name to be seen, find a team and slap some support on it.

Football, round our way.

1994: Made in 1994, the Dongguan Stadium (东莞体育场) looks rustic and features the communist-style concrete you would expect of a public stadium. 22,000 seats line its stands. It is only a few years older than the University of Bolton Stadium. It is a million miles away in function.

1999: Dongguan Lanwa FC (聯華紅牛) played from 1999 to 2009. They’ve gone, so don’t look for them. No point. Their former ground the Dongguan Stadium (东莞体育场) houses Police and military units. It is next to Soccerworld. Occasionally, or moreso rarely, events can be found on the football field.

In 2010, then Argentine head coach Diego Maradona and his football players had a 10-day tour of China swinging by Dongguan. Soon after this Arsenal F.C. from England launched a football academy.

June 2013: Brazilian, Football Addict, Visitor: A Sports Journalist away from Country, but Connected to Team Being an expat is never an easy task. But, when you are Brazilian, love football and are 19,000 miles away from home during a World Cup being played in Brazil,

October 2014: Foreign Football League. The influx of foreign football players into Dongguan has moved those sport lovers to form a club of their own, along with the local teams looking for stronger competition.

July 3rd, 2015: Silly Sport in Dongguan In football, players aren’t allowed to use their arms. In bubble football, participants are allowed to use their entire mass. Their arms, however don’t really factor into the game. Unique Bar (Chang’an): Drink & Play. China is full of every type of establishment with an English name that seems out of place to a native speaker, but Unique Bar is actually quite unique.

September 12th, 2015: Murray’s FC Players Night Both the Scallywags and B Quarter will be joining us for an epic party to celebrate Dongguan’s #1 Football Club!

December 2015: Big Phil Comes to Dongguan Donnguan’s Brazilian community just keep on planning events, and World Cup winning football manager, Felipe Scolari was the guest of honour at a concert and dinner hosted by the Tangla.

June 2018: The World Cup 2018 Finally! THE 2018 WORLD CUP has dawned upon us. read more from our keen football expert about the teams competing, their status and what this year’s event has in store.

March 2019: Read about football in the city for Here! Dongguan.

Dongguan is now seeing a unique opportunity for talented and ambitious youths that wish to develop their football skills and have the chance to play professionally.

April 2020: Some time after the Dongguan World Cup, and following COVID-19’s domestic epidemic, but still during the pandemic, football returns. The International Team and Murray’s F.C. host football two to three times a week.

Autumn 2020: DGFC formed by DG Fit Gym with backing from the remnants of Murray’s F.C. Murray’s F.C.’s soul lives on in name and so on. Weekly gym sessions offered alongside Tuesday night football.

If you want to go swimming, play board games, link in with HereDG  magazine for other activities, football can push you in the right direction.

Read about an influential Brazilian expat called Mateus who settled here and always buzzing around looking to organise games here.

Students Prescribed Football: The Dongguan Education Bureau issued a formal plan in April that will make playing football mandatory for the city’s students. Primary and secondary schools will be required, starting September…

Some to look our for include:

Evenings and weekends are most common.

Kicking a sack of air, having fun and trying to score goals – without conceding goals.

Who can you watch?

Guangzhou R&F (广州富力); Guangzhou Evergrande (广州恒大) and Shenzhen F.C, roughly one hour or so away.

Where can you go?

Tournaments around the country such as Xiamen, Zhuhai, Beijing, Shanghai, Shenzhen, and many more places. Or just to Guangzhou for the weekend.

Powered by a Shenzhen Blues. 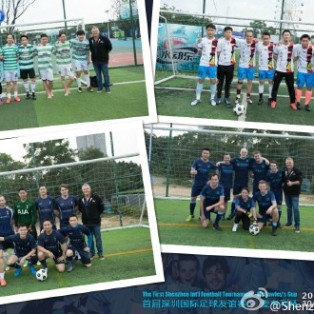 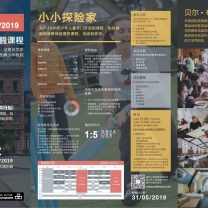 Football brings us together.