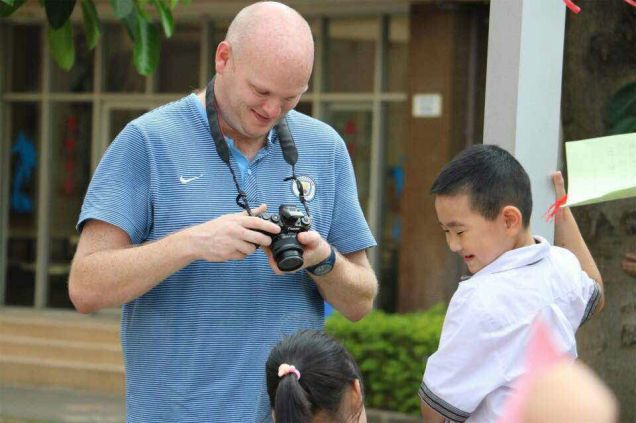 So, the first Friday of my return I met my students for the 2017/18 academic year. They are all grade one students. There seemed to be an age range from 6 to 7 years old. There are considerable differences in height and physique. Spoken English ability appears to very high, with only a limited vocabulary restricting conversations flowing with perfection. They are learning fast and have a great foundation.

I first met several students in the days leading up to Friday, whilst I was preparing the classroom. My students seem to have a range of normal names, not often witnessed in Chinese primary schools. Rain, Christie, Natalie, Lawson, and Evan are a few examples of ordinary names, for extraordinary students. Soffy, whose older sister Waffy, is an oddity of a name, however, her English ability is magnificent. I suspect the names relate to something that I am yet to understand.

Today was my 28th day of school. Many fine moments have been had, and many questions have formed along the short jouney to date. How far up a nose can a finger reach? If a student is hyperactive and responds to other positive stimulus, should they receive different treatment? How funny is a music teacher using a mobile phone to play music over a tiny megaphone device? In China those little portable voice amplifiers are the size of an old Sony Walkman. They will happily distort any old sound. They’re even partial to a bit of feedback that even the Gallagher Brothers would be proud of. How many potatoes are too many? Why do my textbooks and pens keep taking nightly tours away from the classroom? Which children’s books are the best?

One potato, two potatoes, three potatoes… it seems my stomach is the world’s biggest patting board, and if hitting my stomach was an Olympic sport, then China would secure gold. Desciptions of places beyond my stomach, such as my head have ranged from a big white cabbage to that of a potato. My legs have been described as a sack of mashed potatoes. It is great to know your students have learnt the word potato, and have a knowledge of how to cook said root vegetable. If I put on a jacket, they’ll no doubt call me a jacket potato.

So, on this day in 2005, I wrote an article for ATFC.org.uk. Today, I am reminded of it. It feels good knowing that ATFC.org.uk is running and supporting the football club Aberystwyth Town after 13 years. I think ATFCnews.co.uk ran for about 5 years and before that there were a few other dated websites. The team that run ATFC.org.uk are doing a fantastic job. Unlike the national team of Wales and their bid for the World Cup, the ATFC.org.uk team are well and truly in the ball.

An early goal always helps the side who scores. Aber had no such luck as Neville Thompson helped the Bluebirds to start brightly. The ball had not crossed into the Caersws half before Caersws had the lead. Poor concentration and a strong finish around Richard Morgan allowed Thompson to score. Within ten minutes Stuart Roberts sprinted clear to almost test ex-Taff’s Well shot-stopper David Jones. Jones had some luck as Roberts’ shot clipped the post and rebounded clear.

Caersws liked scoring so much they did it again…

Did the scoreline flatter Caersws? Quite the opposite. Caersws made use of the ball, played some neat passes and made what they deserved. Goal number two came from Neil Mitchell. Mitchell added to his one WPL goal for this season. Maybe Aber could have had some attacks and split Caersws open? Caersws were solid at the back… and determined. Their determination gave Aber no time on the ball, and their sheer graft was an example of how hard-working football should be. Even at two nil up, they rolled their sleeves up and got dirty. They played fair football and did what they like to do best, in that of frustrating their neighbours.

Now nobody knows the importance of the derby game more than Sean Jehu, the veteran Caersws player marked the game with a goal after 40 minutes sending Aber in at half-time three goals down. Half-time: Caersws 3-0 ATFC. No nobody can argue that the Aber concentration has room for improvement because yet again Aber were caught wide open. Neville Thompson bagged his second of the game after 46 minutes. The striker paced through and upset the visiting team’s hope of a come-back.

Aber had one shot on target (what I think correctly as being their first on target) soon after the 4-0 mark. Substitute Glyndwr Hughes firing past debutee David Jones from a cross. Minutes later Mr Whitby and his assistant failed to spot Jason Rees’ shot cleared from inside the goal by Andy Thomas. Thomas was clearly shielded behind his keeper and another defender. The referee waved play on much to the disbelief of Aber. With under ten minutes to go Caersws’ Venables headed home to put the icing on the Bluebird fairy cake.

Tonight Aber were watched by Tomi Morgan (Friday looms for another Mid-Wales derby game) and Ken McKenna tonight (who is looking forward to a win at Treflan?). Interesting to see a warm cuppa is still served in cups at Caersws – delicious. Bari Morgan will likely be absent from the coming games due to severe bruising to his thigh. Glyndwr Hughes is shaking off his achilles injury.”

In some ways, I miss writing football reports and watching copious amounts of football. In other ways, I don’t. I like writing about variety and having made the decision to exit HubHao – I can safely say I need a new and local challenge, after a break since issue 27. There is a series of novels in the pipeline with provisional interest in the text from a few choice publishers. And something akin to being a textbook… The Very Hungry Caterpillar it is not.

I love how people often cross the road here, without stopping, looking and listening. Heck, drivers seem instinctive at entering flowing traffic without looking. Their yellow flashing lights are at no risk of a bulb blowing from overuse, or actual use for that matter. Today, m\ny students entering class with pull-along wheely backpacks. They turned up the aisles, and each one hit the first desk, dragging it out of position. I watched most students hit two to four desks in the process. The ones who managed to hit one desk, had a desk on the front row. Those who hit no desks, carried smaller backpacks. These backpacks are often too heavy to be hung on the students’ wooden chairs. Yet, they do. Throughout the day when seated, they are balanced out. When they stand, a seat upends. Despite demonstrations on how to steer around desks, place heavier bags away from unstable seats… it isn’t going so well.