Bravery and tragedy seem to sit hand in hand, side by side. Wherever the former is, we’re usually shown the latter in the news. Tragedy sells. Courage, valour or bravery is not always frontpage news on its own. Superman’s cape draped over a chair sells better than him saving a kitten from a burning oil-tanker out in the worst waves imaginable. Some tragic news brings apathy – because let’s face it, much of the news we see is grim – and often, as is the way of the multimedia age and global connectivity. Sometimes we need to turn a blind eye. There can’t always be happiness and suffering are a worry many carry. The news does not shy away from such tales. It reports in all manners about lust, jealousy, hatred and hostility in equal-ish measures. What we choose to empathise in is up to us, as an individual.

On Monday, in Sìchuān [四川], a region renowned for spice, pandas and Kung Pao chicken, around thirty firefighters were killed. A huge forest fire engulfed them – and none could escape the path of the fireball. 700 brave firefighters had been trying to control the fire for several days. Sichuan is home to Manchester City’s new partnerclub Sìchuān Jiǔniú [四川九牛] who play in the provincial capital of Chengdu. I’ve grown up on a diet of London’s Burning, the TV show, famous for portraying the hardwork and lifestyles of firefighters. I almost became a firefighter myself, but instead, opted to go to university instead. I have firefighter friends. Around 343 fatalities from the 2,996 deaths on ro around September 11th, 2001 were those of the New York Fire & Rescue Services. Firefighters occupy a community of selflessness and put themselves between dangers and the everyday soul trying to survive. Some pay that ultimate sacrifice. On top of that, their mental health is affected and levels of suicide is higher amongst them than the general populous. Firefighters who faced the Grenfell disaster or other such tragic emergencies will surely lose a piece of themselves. 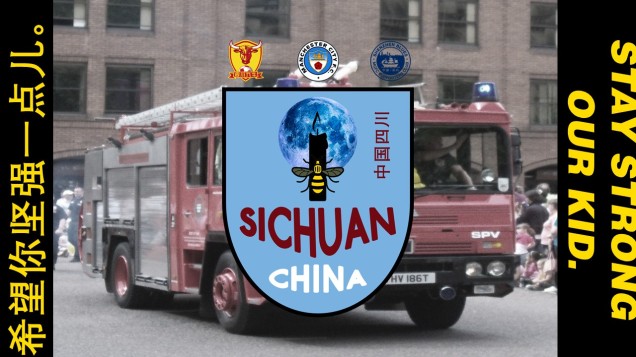 Humans have always worshiped heroes. They may be Gods, they may be comic book figures, or they may have been very much real. Religions have plentiful heroes and examples of bravery. Some, like Islam, show control as a huge auxiliary to courage, in tackling the devils of life and spirituality.

Some religions and governments push embarrassment and disgust through their guidelines, wording and morals. That’s how stones become a weapon of execution in Brunei, right? Don’t worry, they need witnesses or a confession. Sorry, Brunei but your rules are cuntish at best. How do the private actions of individuals that cause no damage to those around you, affect your leadership or government or religion? It is utter bullshit. The Sultan of Brunei is cunt. I challenge him to a public conversation, face to face. A debate. Let’s get his problems out in the air – and his government’s worries. Come on Mr Sultan Haji Hassanal Bolkiah Mu’izzaddin Waddaulah ibni Al-Marhum Sultan Haji Omar Ali Saifuddien Sa’adul Khairi Waddien Sultan and Yang di-Pertuan of Brunei Darussalam, let’s talk. If you want to experience sedition, I’ll fight for another (woman’s or) man’s cause, with words. Give me my chance to show courage. I’m not writing from boredom but from contentment to your new laws. I hold these law in contempt of humanity. I’ll feel disappointment if you do not reply. I won’t be surprised as anywhere that amputates hands for thefts, brutally punishes minors for petty crimes and completely fails to prevent human trafficking. Their intrays must be overflowing with requests.

I always wonder if such laws are caused by boredom and loneliness or perversed arousal from power over the people. Do they grip panic at allowing too much freedom? Well at least we have Amnesty International, Human Rights campaigners and others to renew our faith in humanity. Again, they are all courageous. All too often they’re fighting for voices in former British protectorates, colonies and places rich in resource. The 159th member of the U.N. are a case in point. Perhaps the U.K. could withdraw the Nepali Gurkha battalion and other military personnel stationed within Seria. But U.K. interests in Brunei probably only stretch as far as having a stopover airport on the way to Oz and New Zealand.

Socrates said a hero is, “a man willing to remain at his post and to defend himself against the enemy without running away” but back then gender inequality was rife. There has been an acceptance and anticipation throughout history of multiple religious saviours and possibly an end to suffering by a higher being, or two. I prefer to think that we alone can save ourselves. Many individuals work in conservation and humanitarian aid. There’re more heroes than we see in movies. They just don’t attract the same desire or curiosity. On a heroic front, Brunei were the first Asian nation to ban shark finning. So, every cloud can have a silver lining – it is all a matter of perspective. Some British Indians hate our new five pounds notes, because Sir Winston Churchill is on there. His willingness to let courageous Ghandi die on a hungerstrike and his general lordly attitude over the “foul race” of Indians and their own fault for “breeding like rabbits”. He wasn’t at all nice to Indians or Bengalis, or Hitler and co (but Adolf certainly deserved it up ‘im). His legacy can be hugely criticised. For me, the Royal family are the same – and Queen Lizzy the 2nd is on one side of the note. That’s history. It is more grey, than black and white. At least with busts, notes, books, documentaries, and more. Otherwise we’d not learn that King of the Belgians, Leopold II of Belgium was a bit of a bastard. Think millions of deaths.

Sir Winston Churchill said of courage many things, but he as both the hero and antihero, cannot be denied his power to compose and express. Courage over risk needs a personal fear to be conquered or managed. There may be deliberation but eventually an intention to act will be made. The courage could be as a perceived good act – or one that is believed to be noble. As noble as a lion or as strong as myself resisting a box of fresh raspberries. Okay, the rapsberries are gone. Not a fine example of strength, but moreone of my own humiliation at not enduring a test. The rage I have in not allowing a punnet of raspberries making it from the fruit shop to my apartment door. Okay, I show no remorse. Just resentment. Okay, not that. Sorrow that the raspberries have gone.

“Courage is rightly esteemed the first of human qualities because it is the quality that guarantees all others.” – Sir Winston Churchill

Emotions are strong things. I have an affection for those who are brave – and selfless. It gives me angst that maybe I’ll be called upon to do my bit. How will I react? I am in awe of thise capable of freezing their minds and cutting away from anger, anguish, annoyance, anxiety, despair, disgust, fear, frustration, grief, horror and shock in order to save other people – especially when they are unfamiliar with such strangers. That curiosity of my mind wonders how their self-confidence dominates pride and creates a social connection that rejects self-interest. The ecstasy of saving life must further create an anticipation of joyful hope. They never seem to panic or show over confidence, these superhero firefighters. They’re like you and me but made of stronger stuff, at the same time. They’re courage in a bottle. The bottle cannt be procured at a cornershop. It is ingrained in years of enthusiastic service. Our gratitude may be given from time to time, but these service people don’t look for merits and commendations. They get their heads down and do their jobs. Euphoria one day. Sadness the next. Depression waiting around every corner. I don’t envy firefighters. For they have a rainbow of emotions to contend with. It’d give me anxiety! I don’t pity their choice of occupation, but I do pity their salaries. Some risks deserve more surprise and trust. I feel guilty that the U.K.’s elected government is too busy wasting money on things that could fund those who put themselves in truly adverse situations. It is an outrage that the masses have such a little voice to show pleasure and show little passion in looking after our own heroes. Just like the environment, we’ll miss it all when it’s gone.