A kind of swishing sound, only just perceivable to my ear, was what I heard. It happened in such a microscopic space of time that I had no time to react. My instinct said the sound was to be alarmed at. My brain had the signal. The computations were in process. It didn’t add up fast enough. As soon as my central nervous system was signalling peril, it struck. It skimmed more than struck, gliding over my head and landing with a thump two metres to my left shoulder. My head had slowed its momentum and the rock landed with a dull thud. The snow around it had remained intact. It sank into a hole maybe a leg’s length deep. As I peered into the hole, one eye was facing up the slope, making sure this rock’s bigger relatives weren’t coming down to flatten me. The slope was still enough. I gave a little more time to viewing the rock in the hole.

It was slate in colour, crumbly around the edges, rough and worn underneath but jagged and unforgiving on the top. The size, well, it was close to that of a red house-brick. I reached down to touch it. It weighed as much as two bags of sugar, if not a little more. I thought to myself, if that had landed on me more directly, I’d be as good as gone. Game over? I assessed my injury. It was a bump and no bigger than two (or three) that I had experienced earlier in the trek from headbutting low roof rafters and doorframes. It’s a habit I have tried to avoid since being a kid, but as my Mum will agree, I am clumsy. It’s in the genetics somewhere.

With that new bump obtained between Bhratang, the beginnings of the huge western face of Pagunda Danda, I just carried on to Upper Pisang. Not much I could do but knuckle down and see how it panned out. Initially that day, I was fine and later that day, I was still okay. The next day, as we departed the lodge and started our walk onwards, I started to feel an ache spanning from the bump back to rear-right of my head. After an hour of trekking that ache became near agony. It was either the rapid onset of altitude sickness, or that injury was playing up. Livia, Srirang and I trekked through deep snow, and eventually Livia and I stretched ahead a little, but not much. As we reached the mani stones, just shy of a very snowed over river with two bridges, I took a moment to try to understand my pain.

We had opted for the path up to Ghyaru and Humde, because the views would look back across the valley at the Annapurna Masiff. The great mani stones, stood on a ridge overlooking the raging river below, and the smaller tributary that was would have to cross. Many slabs, rocks and smaller carved models carried one simple message, ‘Om mani padme hum’. The beautiful artistic Sanskrit writing curved and glimmered in the various levels of light: ॐ मणि पद्मे हूँ. Om/Aum/ ॐ [white] is a sacred syllable. Mani/ मणि [green] is a jewel (or bead). Pad/प [sky blue] plus me/द्मे [red] is the lotus flower – a flower sacred to Buddhism. Hoon/hum/ हूँ [dark blue] is the spirit of enlightenment. It can also be found in Chinese as 唵嘛呢叭咪吽 and Thai as โอมฺ มณิ ปทฺเม หูมฺ, amongst many languages and cultures.

Right here, on the pathway, the stone plates featured the six syllabled mantra as a form of Tibetan prayer. Some had clearly been painted, but most were natural earthly colours. Decades and possibly centuries of devotion made up this wall, like many other walls throughout Nepal and other countries. I’ve seen many mounds and cairns in similar fashions. Each one, I believe, offers prayer to the locality and beyond. The time and effort for each creation could be seen. No corners had been cut. Devotion had been placed on each faithful stone. This wall was around about two metres high and sagged just a little. It was long as coach and as wide as a wardrobe. You always walk around a Mani wall, the same way the Earth rotates. Buddhism has rules. Against the backdrop of the Himalayas, spiritualism and nature hugged each other. Lichens and mosses covered what surface they could, and birds occasionally perched on the walls, looking down at the snow, trying to find the little food available. At this moment, I assessed the bridges. Livia and I decided the lower bridge route would be the safest option. We set out.

After crossing the lower bridge, we scrambled upwards a few and awaited Srirang. He chose the upper bridge and we met once again. I walked up one gentle wide path and Srirang and Livia chose a steeper more direct route. They met me as I was sat down. My head was pounding inside – and I felt a little sick. There was dizziness. I ate some biscuits and drank plenty of water. Srirang and Livia were concerned. They suggested a rest and we discussed the injury or whether it could be altitude sickness. We were about 3500m up and we had never rushed the journey so far. Ghyaru (3730m) lay just a few metres upwards. After an hour, I decided I had to descend. Livia and Srirang disagreed but we all agreed, “if I feel better tomorrow, I’d head back up.” With that I scuttled back to Upper Pisang, and enjoyed the views of the frozen lake below on the plains, and the ever-angry flows of the Marshyangdi River. I was welcomed back into the same lodge. Even to this day I cannot recall the name of the lodge. It had a Sherpa-Tibetan family and they were ever so nice. I said about my discomfort and they said that I did the right thing.

After an evening of talking with trekkers on their way from Manang, and a few individuals heading upwards, I slipped off to bed. The dal baht power didn’t seem to be shifting my headache and numerous litres of water made me get up during the night several times. Peeing into a frozen toilet with no water to flush it, isn’t a nice experience, at 4am in the freezing cold. Still, it beat watching celebrities on mind-numbing television shows. I’d also spent hours on Wi-Fi trying to talk with customer services at Trip.com – for the second night running, to see if I could move a flight to Hong Kong, because of the growing seriousness of the COVID-19 outbreak in China. Many airlines were cancelling flights and by this time Nepal had apparently closed its borders to China and reportedly banned Chinese tourists. In my anxious mind, it made sense to be proactive and try to remain in Nepal. The border crossings between China and Hong Kong were rapidly becoming fewer too. Why fly to absolute uncertainty?

I awoke a little refreshed but still with a headache. I made the choice to descend further. I set out just before 11am and walked back. I wasn’t sad. I wasn’t relieved. I just had a pain in the head that wouldn’t go away. The walk back was tough as the walk up. The deep snow and occasional blustery winds made it a slog of a day. As I rounded the cliffs and the path led through to The Farmhouse at Bhratang, I spotted a jeep. The driver helped me get to Chame. At Chame, I met a doctor who looked at my head, tested my reactions and concluded concussion. He said no need for emergency treatment and suggested I head back to Pokhara or rest for several days in a warmer village downhill. I was in luck, the jeep driver took me as far as Besi Sahar! Back to the beginning. Here I was dropped at the hotel Manaslu and booked onto the first coach to Pokhara that morning. It felt sad but I had a mix of emotions in my head, anxiety and a head injury. 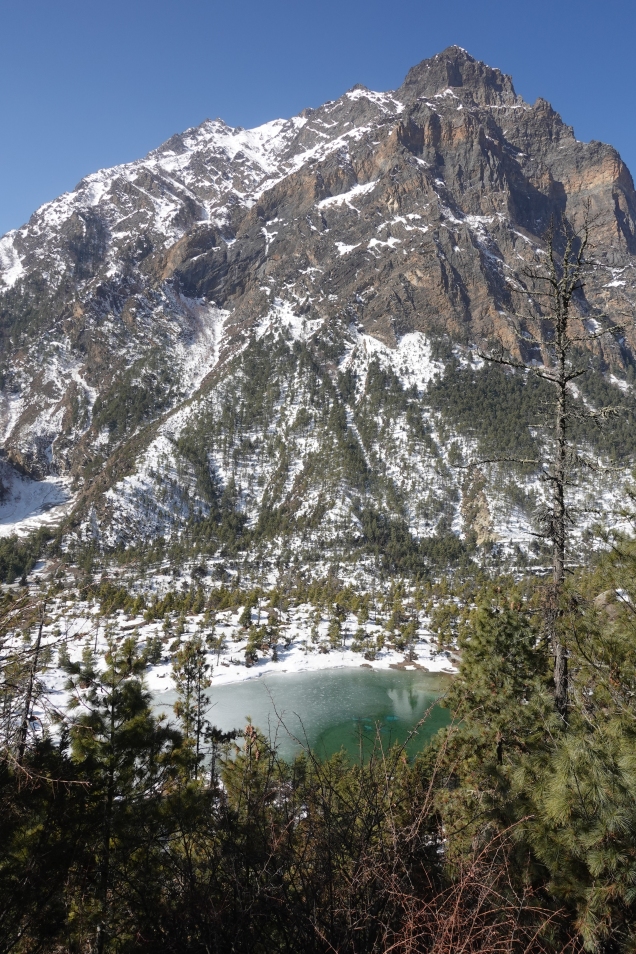 The U.K. Foreign and Commonwealth Office advised against all travel to China but didn’t state a clear reason why. The outbreak seemed to be mostly confined to Hubei and a few other areas. The U.K. wasn’t even screening passengers on arrival from any Chinese city. Was it really that serious?! Could I return to China or not? Would I have to head to the U.K.? Could I stay in Nepal by extending my visa? I had a tight budget and worry had been with me for days. Worry and concussion are not ideal bedfellows. 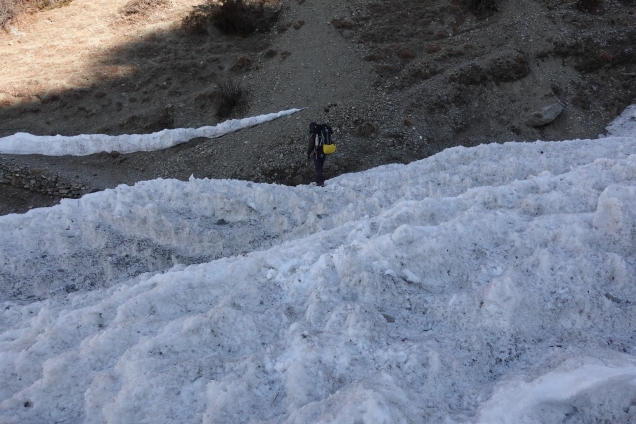 The cumbersome coach clumped along, bouncing and bumping, throwing passengers here and there, and visited countless villages on the route back to Pokhara. At one stop a toothless elderly man sat on a step. He had no shoes on and his clothing looked unkempt. His face crinkled from years of exposure to the sun. He looked at me. He smiled. He gestured with his fingers the shape of a smile, over his face. That’s what it is all about. Experiences, moments and smiles. I smiled back, greeted and waved goodbye as the cumbrous coach continued headlong. I could take much from this journey and experience. 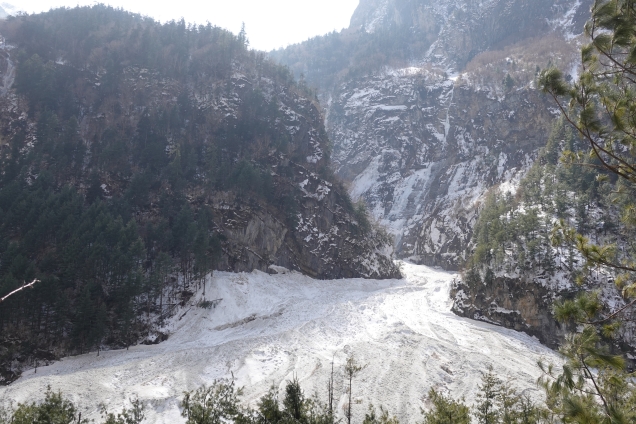 Looking back at the day where the rock had hit my head, I’d been clicking away like crazy on my camera before that. After that, I’d rarely taken many photos. It clearly marked a change in my behaviour and my general health. The physical and mental challenge had just been knocked out of me. Yet, I experienced many great moments, even on the jeep journey back down. It isn’t every day a herd of goats gets in your way! From then on Nepal would still give me more great moments, but the trek had finished.