Selector on, side by side, slamfire slips suddenly and suicidal.

Abandoned seats by the parade, spilled over bottle leaking Cherryade.

Rate of fire, red dot sight, ricochet off the rifle bedding, and rolling blocks of rounds per minute.

It’s our right! Shoot out the blight! Aim the sight! No need to write.

Obturate an open bolt as it delivers a sudden jolt.

The screams and shouts, as brutal horror discounts.

Banners flip in the wind, farewell funerals and victims of the sinned.

Iron sights jammed by jackets shot out by jeweled bolts of kicked leading.

Guns must go! To guns we say no! Why guns, why so? Guns we don’t know.

Half-cock, hammer bite and hang fire as this horrid hiss delivers a headstamp to his headspace.

Walking without worry no longer, the will to cry much, much stronger.

Right to peace at work! Safe from the berserk! Another stupid cruel jerk!

Disassembly, discharge and dummy in a dust cover. Ear protection just be worn. Eye relief? None.

Blame the games and video controllers. The right to arms since civil war told us.

Walking the walk, like little toy soldiers. If it’s good enough for them, why will no one stop us?

Ballistic coefficient, user deficient. Blowback on bluing with no go back. No way back.

There’s a global pandemic on. The coronavirus and its related disease COVID-19 has ravaged the planet, taking at least 411,277 (from 7,238,611 infected) lives. Racism is being warred against too. As protestors and police get close and personal, belief and freedom are risks. Standing up against police violence, draws people into a dilemma. End or delay the battle against racism? Contribute to the spread of a potentially fatal disease? If you choose to overwhelm the NHS (National Health service). The virus doesn’t care one iota about your race. You’re ostensibly more likely to die if you are black, Asian or Middle-Eastern, so is it safe to protest? What are your thoughts? For something that disproportionately affects minority communities, that are now coming together in protest, well this could be a huge disaster. Beliefs versus risks. In my mind, I’d want to support the protests, but I’d want to support and protect the NHS too…

“We may have all come on different ships, but we’re in the same boat now.” – Martin Luther King Jr.

I used to eat at Shirley’s Café or Gregg’s bakery and get a breakfast barmcake with a coffee, when I worked on the corner of Brazennoze Street. Here I could walk down the road and see something odd. Manchester has a statue living down the road from Albert Square. High upon a granite plinth the distinct shape of Abraham Lincoln can be seen standing. That’s right. Abraham Lincoln (February 12, 1809 – April 15, 1865), 16th President of the U.S. of America. He’s been stood on Brazennoze Street since around 1986 eyeing passers-by but casting no judgement. The street runs between Albert Square and Deansgate gaining large footfall around office hours.

“You cannot escape the responsibility of tomorrow by evading it today.” – Abraham Lincoln

The square opening on Brazennoze Street is known as Lincoln Square. Few know this. There aren’t many signs and up until a recent renovation nearby, the square has largely been overlooked in favour of the more marketable St. Anne’s Square, Albert Square and the Corn Exchange frontage. The pedestrianised pathway uses red bricks so common within northwest England, and on a damp rainy Mancunian day, it isn’t a place to go looking for escape. A few saplings and trees can be seen nearby but it doesn’t feel very green or warm. Manchester, like many port cities (we have a Ship Canal don’t you know!), has links to slavery. Any city with an insurance company or a bank does. Sorry Liverpool.

Our Lincoln, the our kid of that America, used to be stood down Platt Fields Park. The son of William Howard Taft (27th President of the U.S.A.) made it. Charles Phelps Taft’s statue was one of two gifted to England – not Manchester, as a symbol of Anglo-American togetherness. One replica ended up in London, as the capital city. The original was left in Cincinnati, Ohio where Taft Junior was mayor.

The other replica was kind of posted to Liverpool but Manchester Art Gallery put in a sneaky bis in 1918, kind of a precursor to eBay outbidding and snatched it from Scouse hands [see also Demba Ba and Steven Gerrard]. London, then went one better and brought a much larger replica of a different Lincoln statue, in what can only be seen as a pissing competition. London urinated higher. By 1919, Manchester’s Lincoln statue was added to Platt Fields. By 1986, Manchester wanted to give more prominence to Lincoln and the cause. It was moved to Lincoln Square and placed on a new plinth. Beneath it a plague reads, “The support that the working people of Manchester gave in their fight for the abolition of slavery during the American Civil War…….By supporting the union under President Lincoln at a time when there was an economic blockade of the southern states the Lancashire cotton workers were denied access to raw cotton which caused considerable unemployment throughout the cotton industry.” 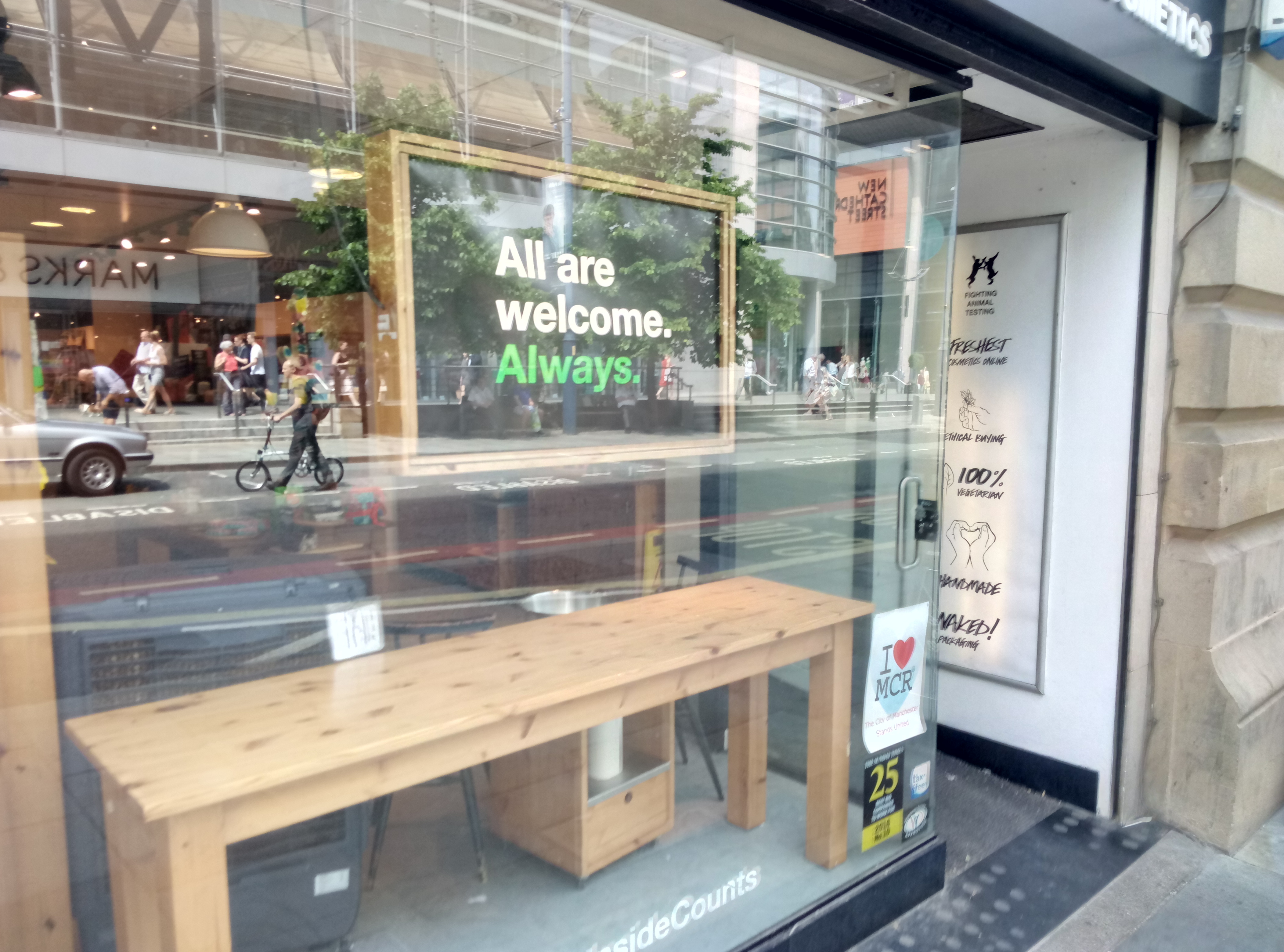 “Slavery is founded in the selfishness of man’s nature – opposition to it is his love of justice. These principles are an eternal antagonism; and when brought into collision so fiercely, as slavery extension brings them, shocks and throes and convulsions must ceaselessly follow.” – Abraham Lincoln

Manchester’s liberal values and Lincoln’s cause became as one. Britain was an ally. Reportedly even the Confederate Flag flew on some Lancashire mills during the American Civil War. Decades of air pollution and legendary Mancunian weather had left it neat impossible to read the words on the statue of Lincoln’s plaque. His Royal African Company displaced around 80,000 people (men, women and children) to America. Manchester’s statue of Lincoln is seen as a key point for the opposition to slavery. Known often as the ‘Great Emancipator’, Lincoln was part of society’s push towards progression and racial justice. Some argue he was a racist, some don’t. But, what can’t be chalked away from history are the facts. Lincoln made a difference, in far more difficult times for many, especially Africans and African-Americans. What should be taken from Lincoln’s appearance in Manchester, is that Lincoln, like many of his peers was complex character and times, which may explain why he apparently wanted to re-colonize the former-slaves, or send them back to Africa…

“Those who deny freedom to others deserve it not for themselves; and under the rule of a just God, cannot long retain it.” – Abraham Lincoln

The Abolition of the Slave Trade Act came in 1807. Almost 213 years later a statue was torn down, toppled and sank in Bristol. The name Colston has long been known. Edward Colston was a 17th Century slave trader. A bastard and a blight on British history, part of the very tapestry that had built an Empire. Around 10,000 people paraded the wreckage before the statue was scuttled in the harbour. Around this time Sir Winston Churchill’s statue is London was sprayed with additional text, ‘was a racist’. Scottish streets were renamed after police brutality victims. Oxford University is a target due to its links to Cecil Rhodes (think white supremacy, colonialism and racism).

Whilst Abraham Lincoln was unsure about what to do with slaves after the end of slavery, now society finds itself at a road where one terrible death has triggered a wave of protest. There is no room in society for racism. Many of yesterday’s heroes or founders of today’s world are not good. Just as many companies has profited from the Nazi persecution of Jewish and other ethnic backgrounds, we have to embrace the atrocities and learn.

“Character is like a tree and reputation like a shadow. The shadow is what we think of it; the tree is the real thing.” – Abraham Lincoln

JAB Holdings (Reimann family) that own Krispy Kreme, Panera Bread and Pret a Manger etc have admitted to profiting under the Nazi regime. French cosmetics company L’Oréal have been tied to illegal property seizures. Barclays Bank (established 1690) has already compensated Jewish members who had their assets seized in France. If you have heard of Siemens, Bayer, Nestle, Coca-Cola, Allianz (Bayern Munich’s ground which is weird for a club once taunted as a so-called “Jews’ club” by Hitler’s twonks), Audi, BMW, IBM, Hugo Boss, Mercedes-Benz, and Volkswagen well you may have heard that they are some of the corporations that made some money from forced Jewish labour. These historic crimes were after black slavery (to and in America), yet seem to have been discussed more openly. History cannot afford to hide indifference.

“If there is anything that a man can do well, I say let him do it. Give him a chance.” – Abraham Lincoln

We’re in the 21st century yet a few idiots want to keep us in the past and destroy world relations. The less said about ‘Miss Hitler’ and Trump the better. We can reshape history and move artefacts that our forefathers and mothers saw fit to decorate cities and towns. We don’t have to be proud of all of our heritage. We don’t need to hide it all. We shouldn’t be hiding any of it. I was born a European and next year, I’ll just be British. I’m human and I am Mancunian – and for me being Mancunian is all about embracing people no matter where they come from, what they believe or who they support (even if it is United).